I love Christmas and New Year, and in my family it has always been a time for traditions. Over time we've all evolved our own and we've tended to eat and drink particular things on particular days from Christmas Eve to New Year's Day. The settled traditions worked well when there were a few of us doing the cooking, eating, drinking and clearing, but in recent years the pattern has needed some tweaking. That in turn has led to some new traditions.

Ten years ago I'd leave as much as possible to the very last moment - and that was part of the excitement for me. I enjoyed the build up through Advent and didn't want Christmas itself to start too soon or, come to think of it, to finish too early! But with (sequentially) the illness and death of my father, my mother having a stroke and then losing her sight and then my own treatment for breast cancer, I have had far more to do and much less energy for doing it. Moving to the Land of New Normal has meant that new traditions have sprung up and continue to do so.

For a start, planning now starts much earlier and these days I have most of the Christmas cards made by mid November. I now buy rather than make the door wreath and Christmas cake, as well as the brandy butter. This year, in a further energy saving drive, I bought disposable foil roasting trays to avoid some of the washing up.  Although none of these would take much energy to do myself, taken together they make a difference and I have finally come to accept that I can't do it all. I have decided that there are some things I really love doing and I want to ensure that I have the energy for these, while others I am now prepared to buy in.

The food has also been adapted to take account of fewer people eating and drinking it. This year we had one day when supper was the poultry cold cuts and the main meal was a traditional afternoon tea! The major change will be to New Year's Day dinner. In the past this was a roast of some sort - possibly poultry or perhaps beef. This year we have decided to have salmon; a much lighter meal and one that won't require me to "do something" with the leftovers. And, as salmon is a firm favourite in my family, I can see that this could well be the start of a new tradition.

It is nearly time to pour a glass of something and settle down to another tradition by popping the 1984 ROH production of Die Fledermaus into the video!

A very Happy New Year to all. 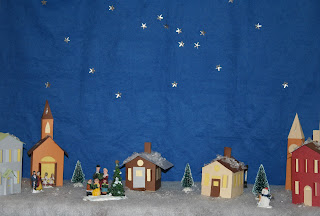