Monday at the NCRI Conference got off to a good start when I attended the plenary lecture by Cheng-Har Yip from Malaysia on the subject 'Challenges in the management of breast cancer in low and middle income countries'.  So much of the conference is about high tech solutions which are not always available in low and middle income countries so it was good to have this reminder.  We heard about challenges at all stages from late presentation because of fatalism and a preference for trying alternative therapies first, though lack of access to reliable pathology and onto low access to radiotherapy.  Some countries have a multitude of languages so patients may face a language barrier on top of problems such as distance and the cost of treatment.  The importance of a multidisciplinary approach was stressed along with collaboration between the high income countries and the LMICs.  It was very encouraging to hear the stress the speaker put on listening to what women say that they want.

This last point also came up in another excellent Monday plenary, namely Stan Kaye giving his Lifetime Achievement Award lecture on drug development and ovarian cancer.  He spoke about BRCA testing now becoming routine, the use of the PARP inhibitors and the management of recurrent disease. He also spoke about new targets, heterogeneity and the importance of listening to the patient.  One of his last points was 'never forget who you are treating.'

The Molecular Diagnostics workshop was a great opportunity to reflect on lessons learnt from several initiatives.  Louise Jones of Barts Cancer Institute reflected that the transformation of the NHS is a significant legacy of the 100,000 Genome project.

Monday evening saw the traditional Independent Cancer Patients' Voice lively meal in the local Pizza Express to which we invite a number of our friends an colleagues in the research and clinical practice community.

It has been a very long time since I last posted here; it has been a busy year on many other fronts and blogging rather slipped.  But November is NCRI Conference month and I was there again this year for 3 days of cancer conference, exhibition, posters and networking.  As usual, I will split this into bite-sized pieces as this makes it easier to write up!

For the last few years the conference has had a smart phone/tablet app.  It has been a bit of a novelty in the past but this year I found it extremely useful.  There is still room for improvement, but this year's new feature of being able to write notes of sessions straight into the session details was invaluable. It also supported online voting in the sessions where this was relevant and the ability to send questions to the session chair while the presentations were ongoing.  You could message other delegates - provided they were using the app, of course - and see floor plans and maps of the session room locations.

My journey up to Liverpool was not smooth.  I had to travel via London and my first train was delayed, the one before had been cancelled, it was half the stated length and Arsenal were playing at home.  On top of which, work on the track meant the train had to take the long route round and in spite of having 45 mins between trains I began to think I was going to miss my connection. Happily, I didn't and after that the journey improved no end. 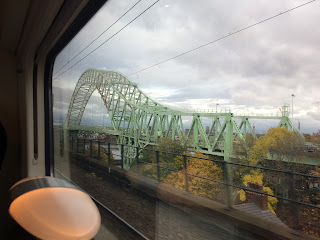 The first and last days are half days, with two full ones between.

Sunday's highlight was the debate "New Tricks for Old Drugs", hosted by the charity Breast Cancer Now and chaired by Judith Bliss.  The motion was "This house believes research into repurposing existing medications and optimising use of current breast cancer treatments should be prioritised above research into developing novel agents".  Speaking for the motion were Robert Coleman and David Dodwell, while Paul Workman and Susan Galbraith spoke against.  A poll (with online voting!) at the start showed a large number of people declaring themselves as undecided, so the speakers had all to play for!

Rob Coleman started out with the bold statement that drug discovery was broke and not delivering for patients. He pointed out that while there had been a decline in mortality since 1990, this had now plateaued.  There have been no new adjuvant therapy drug approvals in the early setting for 10 years and new drugs for metastatic disease are not getting NICE approval. He could see no likely change in this position so money was being spent with little patient benefit and this was becoming unsustainably expensive.  He made the point that breast cancer is in practice a large family of rare diseases. Therefore drug repurposing deserves investigation and he cited the position in regard to bisphosphonates in this respect.

Paul Workman then spoke to make the point that while drug discovery is difficult, timescales are shortening and even with repurposing, discovery is still essential. He gave examples of rapid repurposing coming hot on the heels of discovery. There is still a mass of targets for investigation and drug discovery is vital in the field of overcoming drug resistance.

David Dodwell said that we need to do better with what we already have. He spoke about extended endocrine therapy, compliance issues and variations in practice.

Susan Galbraith started out by reminding us that while improvements start in the metastatic setting, the greatest effect is seen later when drugs move to early stage. This means that RCTs can underestimate benefit. She pointed out that UK spending on healthcare, and within that on cancer drugs, is lower than in much of the rest of Europe and that we could choose to spend more.

The questions from the floor pointed out that we need both repurposing and discovery. It also drew out that there are issues other than efficacy to consider, such as tolerability and that there are fewer unknowns with existing drugs.

I was a bit surprised that the proposers of the motion didn't make the point that they weren't suggesting repurposing instead of discovery but that, at least for a while, repurposing should take priority.  All in all it was serious but fun and conducted with great good humour.

In the final vote the motion was narrowly defeated but could claim the victory of having converted a greater proportion of the undecideds to their view. After which it was time to go down to the exhibition area for a glass of wine and chat with some of the exhibitors.