Monday 15th to Tuesday 16th January saw the 1st UK Interdisciplinary Breast Cancer Symposium take place in Manchester, hosted by Breast Cancer Now.  It was a packed few days, consisting of a mixture of plenaries, keynotes and parallel sessions plus exhibition and posters.  The major problem was deciding which sessions to attend and finding time to see the posters!

It isn't easy to pick out highlights, but here are some of mine ...

Dr. Laura Esserman, in the first keynote, made a good case for the neo-adjuvant approach, seeing it as precision medicine at its best. Not only can this approach obtain valuable information for the individual patient in terms of what is or is not working, but it can shorten the time needed for trials to yield results. She raised the question of whether knowing the response might enable a de-escalation of therapy for a high response and/or low risk and escalate for low response/high risk.  And with the possibility of a shorter time to drug approval, could we make the case for lower pricing?

In the Metastatic Disease session, Professor Stephen Johnstone outlined situations in which there is a compelling reason for combination therapies, reviewing a number of recent trials.

Perhaps not surprisingly, given recent events (!), I found the Triple Negative Breast Cancer session particularly interesting.  Professor Andrew Tutt delivered a packed talk on the biology of new targets and Dr Chuck Perou followed on with precision medicine using a systems biology approach, teasing out the different types of TNBC. Jelmar Quist then drilled down to the specifics of HORMAD 1 expression.

Monday's final keynote on understanding risk was delivered by David Spiegelhalter. As always, he spoke powerfully and entertainingly.  Media coverage, exaggerated claims and negative framing - not to mention the drive for certainty - all cause problems as we attempt to understand and communicate risk.  So what should we do? We need to justify what we claim, use absolutes rather than relatives and put things in perspective.  Engage, take responsibility and present properly!

After which it was off to mingle, aided by wine and posters! 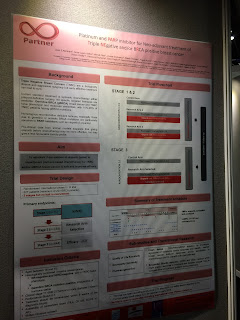 Tuesday opened with an excellent keynote from Professor Jack Cuzick on breast cancer prevention in the population at large, both the simple and the more complex options.  Avoiding tobacco, controlling weight and being physically active were, of course, all at the top of the list. While low dose aspirin has  smaller preventative effect for Brest cancer the some other cancers, it might still be important (hence the current trial). And while alcohol is less of an issue than many people think, it is still an issue.  For the high risk population there are chemo-prevention options.

That lead neatly to the session on Managing and Measuring Breast Cancer Risk. Professor Fiona Gilbert spoke about the need to consider different screening methods and re-think screening strategy. Professor Gareth Evans then picked up on stratified screening, taking us through the PROCAS 1 study. The issue continues to be finding and treating the ER -ve, Grade 3 and Triple Negative cancers...  Professor Anthony Swerdlow presented some findings from the Generations Study and Zoe Kemp concluded the session by discussing genetic risk and testing. Interestingly she said that when testing criteria were broaden in a study, 50% of those found to have  mutation did not meet the testing threshold of either Manchester or BOADICEA. Definitely food for thought there.

In the afternoon I attended the session by David Spiegelhalter and Lesley Fallowfield on communicating risk. They pointed out that there is often a lay assumption that more treatment is better and that the harms and risks are less likely to be considered. This is not helped by low levels of numeracy and high levels of statistical illiteracy - and not just in the lay population!

I concluded with the Challenges of Local Management, which included the situation of an occult primary and positive lymph nodes. The final paper was delivered by Dr Charlotte Coles on current and future indications for partial breast radiation. With all the trials to consider, this looks to be an important step. As someone who has just experienced the advances in radiotherapy over the last nine years, I look forward to this as an option for some women in the not too distant future.  Which brings us back to the realisation that more treatment is not always the better option.

Overall an encouraging Symposium which pointed to the fact that we have much still to do.


At a personal level, while it was tiring for me, I was delighted not only to have the energy and opportunity to attend this Symposium but to do so with both the patient advocates and the cancer professionals who have supported me over the past months.

... as Virgil said in his Georgics, which I re-read when I stayed with my sister in November.

I haven't posted anything to the blog for some time. With treatment and everyday life and work, time just disappeared.

I finished chemotherapy and had my surgery in mid November.  Happily my sense of taste returned in time for Christmas! I am now having radiotherapy and have just a week now before that too is done.  Time both stands still and rushes past while in active treatment; it is an odd sensation. Both chemo and surgery went well and I'm making a good recovery from both. 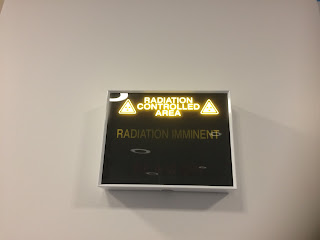 Radiotherapy has come a long way in the last nine years. Although the basic principles are still the same, the equipment and delivery (and imaging) are more advanced. Planning was a much faster process. 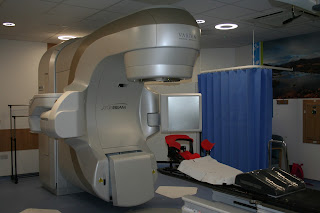 Somehow it feels more comfortable this time around. In part this is, no doubt, because I know what to  expect but it is also true that in spite of much more extensive surgery to the axilla  (not to mention lymphoedema), it is a more physically comfortable set up than it was before.

This time around I am being treated in rooms with a mazed entry rather than a heavy shielded door and that is more pleasant. The space feels more open and airy and there isn't the clunk and slightly forbidding feeling of the door rolling into place and locking you in. 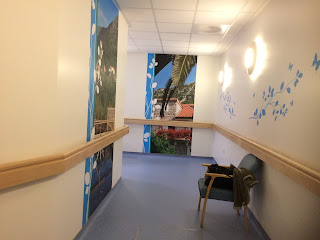 It is is, as always of course, helped by having a kind, thoughtful and informative treatment team; prepared to indulge my requests to take photos and answer my incessant questions.  In this I have been fortunate throughout my treatment.