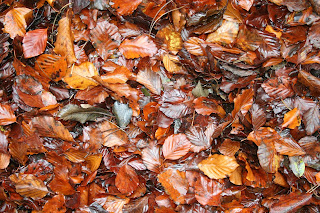 As we leave October behind I am very thankful to see the back of the awful pinkness of people treating breast cancer as a big joke and an excuse for a giggle. Above is the real colour of October!

It amazes me that anyone could think that a campaign called 'tickled pink' could be anything other than misconceived and insulting at best. After all, what does the phrase mean? Would you say that you were ticked pink to be involved in a road traffic accident, or to have been made redundant? And if not, why on earth would you use the phrase in relation to cancer?

Wear it pink might be fine if people were being encouraged to wear a pink ribbon or blouse, shirt, tie, wristband etc. for the day. Encouraging pink feather boas, wigs and huge cardboard spectacles while grinning inanely is rather a different matter.  Moreover, while breast cancer affects a large number of people and still kills far too many, there are so many other cancers also in need of research and awareness.

I suspect that the reason for both the focus and the silliness is because we are back to the school boy behind the bike shed mentality of making anything to do with breasts a bit of a giggle.

And while I'm having a rant about insulting behaviour - I see from the news that Macmillan have appointed to a post designed to counteract some of the cancer myths and misinformation that circulate so freely. This, in theory at least, is an excellent idea. Indeed, many of the specialist cancer charities do issue press releases designed to refute some of the more widely circulating myths. However, if the report I read is accurate, the project seems to have got off to rather a bad start with the post holder making some sweeping and highly patronising remarks about the people she is supposed to be supporting.

She is reported to have said “Once the doctor says 'cancer', people automatically then shut down and they don’t take in the information they are given ... and then they'll sit online that night and get themselves into a frenzy with what they're reading”.

While this may well be true of some people, it certainly was not so for me on either diagnosis. Neither was it true for many (indeed most) of the cancer patients I know. Such a general statement about 'people' diagnosed with cancer is at best misguided and patronising and indeed is itself misinformation! It certainly does not engender confidence in the post holder. Moreover, the remarks were totally unnecessary in order to justify her project. All that was needed was a comment that in the digital age misinformation can spread rapidly and extensively until it can appear common knowledge until you look more closely.

Her words do fit the pattern of this charity's disempowering attitude to cancer patients. As someone who has worked in advocacy and empowerment for over 20 years I find this attitude both offensive and unacceptable. If a member of my team was making remarks like this about our clients, we would be having some very serious conversations. In practice, I am pleased to say that I have every confidence that no member of my team would make such remarks.